The inside of your body is closer than you might think
Our teeth are attached to the surrounding bone via small flexible rubberlike fibres called the periodontal ligament (PDL). The fibres function as shock absorbers and reduce the risk of the bite force damaging the teeth. To protect this ligament, the body has a special barrier that we call the gums.

A front tooth, side aspect. The gums surround the tooth and protect it from bacterial invasions.

The gums are a part of our defense system
The gum surrounding the tooth contains a 1-3mm deep pocket. If you probe into the pocket, you can feel the bone (please don’t try this-at home; it is painful!). In and around this pocket, millions of bacteria gather. To protect the body against the bacteria and bacterial debris bombarding it 24/7, the gum contains many blood vessels, supplying the area with defence cells.

Balance or unbalance
When your gums are fresh, there is a balance between the attacking bacteria and the body’s defence. However, if an unbalance occurs (for instance, if your oral hygiene is compromised) the bacteria could attack and affect the gums, causing damage. Your body will attempt to heal the damaged gums. Defence mechanisms are activated through the blood stream. The body rapidly creates new blood vessels in order to transport more defence cells to the area. These blood vessels are fragile. You will not notice the increased blood supply initially, but flossing could lead to bleeding due to the fragile blood vessels rupturing. When you see blood on the dental floss, you might think you have done something wrong and may stop. However, you should continue flossing as the body needs help removing the bacteria. Occasionally, cleaning may fail and bacteria will enter the blood stream. In a healthy body this is not a problem but if your immune system is compromised, for any reason, the consequences can be severe.

Restorations will be affected
All the filling materials we use are sensitive to liquid. In an inflamed environment, with gums prone to bleeding, it is difficult to create the dryness needed for predictable results. 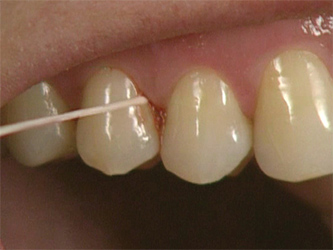 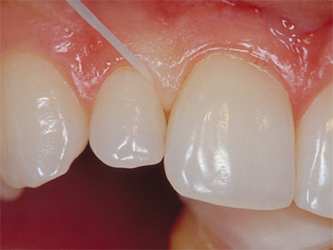 Gums bleeding (left) during flossing is a sign of inflammation, most probably caused by bacterial infection. Healthy gums rarely bleed when flossed (right).

What you can do before you visit your dentist
Our dentists strongly recommend brushing and flossing twice daily. You may experience soreness and slight bleeding for the first couple of days, especially if you have never flossed before. You may miss up to 25 percent of the bacteria if you do not floss. This will affect your breath negatively too. In the beginning, flossing will take some getting used to, but it will quickly become a natural part of your daily routine.

The patient was not aware of the inflammation between the teeth. When the amalgams (top) were removed, the gums showed up inflamed and bleeding (middle). After replacing the old amalgam with ceramic onlays, the gum is healthy again.

A chronic bleeding gum can be one of the most common mouth diseases (periodontitis) that could lead to loss of teeth.